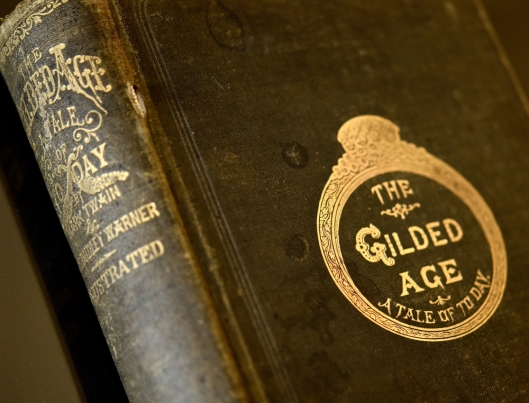 AT YEAR’S END, I can’t help but feel some sense of introspection. This year, I opened an 1895 edition of The Gilded Age, A Tale of To-Day, by Mark Twain and Charles Dudley Warner. It was Twain’s novel about the turn of the century. The book was a gift to me from my father, who passed away in 1996.

When the book was published, the term “Gilded Age” became synonymous with graft, materialism, and corruption in public life. The plot opens as a poor Tennessee family, the Hawkins family, dreams of affluence by selling 75,000 acres of worthless Appalachian land acquired by their patriarch, Silas Hawkins. Truth, lies, and exaggeration color aspirations shaped by want, greed, and deceit. Mark Twain’s wonderfully sarcastic wit and his gift for description present an era of uncanny resemblance to the politics of today. The subtitle, containing the words “To-Day,” remains as current as human behavior’s lack of change.

In the 1950’s, my father bought some of the Cumberland mountain land once owned by Mark Twain, and I remember our family visits to that region. I remember the Obed River, where the “gold” glistening along the stream in the afternoon sun was actually iron-stained rock from abandoned coal mines.

Having recently read two wonderful memoirs, Hillbilly Elegy (by J.D. Vance) and The Glass Castle (by Jeannette Walls), along with a fine historic book, Night Comes to the Cumberlands (by Harry Caudill), Twain’s description of the rugged East Tennessee hills comes alive with relevance.

More important to me, I can now see how reading The Gilded Age directly affected my father’s views of public service as well as providing for his family. I’ll be writing more about this. But, for now, I’ll enjoy turning the brittle pages, carefully, of this 1895 edition by Mark Twain…savoring his descriptions of the age…with relevance today.