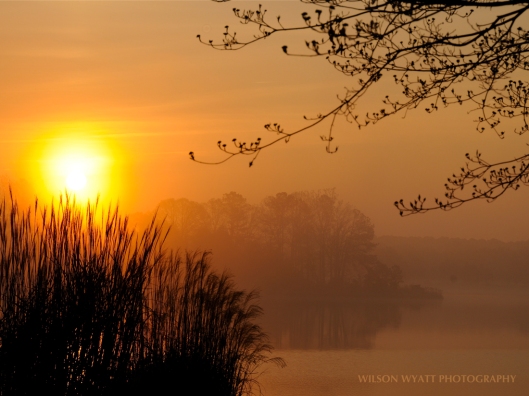 First Sunrise in Spring, by Wilson Wyatt, from “Chesapeake Views – Catching the Light”  Click on image for larger view

Reprinted from The Talbot Spy (talbotspy.org):

The Eastern Shore Garden Club will be welcoming Wilson Wyatt, Jr., photographer, author and teacher to its second Environmental Lecture with a slide talk on “Nature and Landscape Photography,” Wednesday, February 12, 2014 at 11:30 AM at the Talbot County Free Public Library, in Easton, Maryland. It is free and open to the public.

Executive Editor and a founder of The Delmarva Review, Wilson Wyatt moved to the Eastern Shore about 14 years ago when he discovered the writers’ community he had been looking for. As an author and photographer he paints pictures and moods with words and light, believing that storytelling and a connection with your subject is as much a part of a good photograph as a story or poem––”when a photograph communicates a feeling from one human to another, the craft has turned into an art.”

While shooting his Nikon Mentor Series “Best of Maryland” award-winning photo: “Sunrise at Thomas Point Lighthouse” Wilson waited as two vessels passed each other behind the lighthouse while the sun rose. The shot captured this changing scene taken from his boat that was also moving.

In his recently published book, Chesapeake Views-Catching the Light, there are many examples of the varying light and landscape at different times of day and year. Each demonstrates the patience, the power of observation and inner sensitivity it takes to catch with a click the mood of a particular season or time of day as Emily Dickinson did with words in: “There’s a certain Slant of Light, Winter Afternoons.”

Wilson says, “There is pleasure in craftsmanship but when artistry happens, we know something special has occurred. The creation is exhilarating.” When you see his photographs called “December Reflection” or “The First Sunrise of Spring” (above), the quality of light is absolutely particular to the season. He says that photography is about working with light, a mere blink of light in a moment of time with your camera being a kind of clock. Carl Sandberg put it poetically in an inscription to Edward Steichen, “camera engraver of glints and moments.” Wilson Wyatt’s first book of photographs, also on light “Yosemite–Catching the Light” grew out of a camera trek with his son, also a photographer.

We were first told about Wilson Wyatt by a garden club member, who took his photography course and learned so much she recommended him for this talk. He will be giving workshops again this spring at the Chesapeake Bay Maritime Museum’s Academy of Lifelong Learning. Last year it filled quickly with 30 applicants and more on the waiting list.

Tonging for Oysters II – click on image for larger view

I believe the same is true for all the arts.  There is craftsmanship, and there is art.  We struggle to master our craft, hoping to create something worthy of becoming art.  We don’t have to do that.  There is pleasure in craftsmanship.  But when artistry happens, we know something special has occurred. The creation is exhilarating, for both the artist and the audience.