Haboob Over Phoenix, Arizona – Click on any photo for large view.

A haboob (Arabic for “strong wind”) rolled a fast-moving wall of dust across the desert, engulfing most of the Phoenix area at 5:15 p.m. on Saturday, July 21.  Considered the largest and most dangerous of dust storms, it comes to the arid region about three times a year, during July and August, pushing dust, sand, and debris along its massive path.  Motorists pull off highways, and residents find cover for the two or three-hour duration.  It precedes a monsoon, the thunderstorm whose downdraft or microburst creates the powerful haboob…though, sometimes, the rain evaporates in the heat and never hits the ground.  Last Saturday, the rain came, as well.

I’ve seen these storms from an airplane…but never up close.  I was in Scottsdale visiting my son.  We are both photographers.  We were driving along the Pima Indian Reservation and spotted the wall of the dust storm billowing over the horizon, as if some invisible force was pushing it to the ground and churning it forward.  It was an incredible sight…powerful and mysterious.  The wall of dust was moving toward us at about 30 miles per hour.

I pulled off the road and parked on a sand clearing.  We got out.  I had my camera in hand.  Wilson III, my son, picked up an iPhone, and we walked toward the storm to gather some images.   This was an amazing opportunity.   Some other cars passed by, but we were the only ones who stopped to take photographs.  The wind picked up.  As it came closer, the thick dust wall grew taller and more magnificent.  We both took photos…of the storm and of each other.  As it neared, the air turned an orange brown color, and debris started to roll across the desert.  When the wall was almost above us, we noticed a multitude of black desert birds being carried by the wind in the front of the ballooning cloud.   They used the momentum of the wind to carry them to safety.

When we felt the dust and sand against our skin, it was time to return to the car…but we continued to take images and experience a spectacular phenomenon of nature.  While the wind gusts were strong, we were not in danger.  We just felt the exhilarating power of nature at work.  I hope you enjoy these images from an afternoon we will not forget.

Nature’s Spectacular Power – Eye of the Storm – photo of me by my son, taken with an iPhone 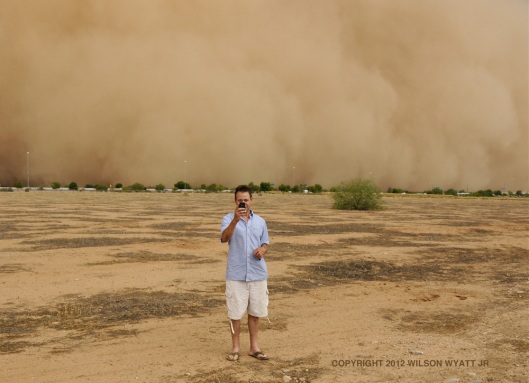 Photo of my son, as the haboob moves toward us

– The Storm Arrives (click on photo for larger, detailed view)

6 thoughts on “Nature is spectacular, commanding our respect”

This site uses Akismet to reduce spam. Learn how your comment data is processed.